Inside the Tumacacori Church
and Carmen Monteverde, wife of Nabor Pacheco. Ignacio Pacheco was baptist there, January 5, 1776.
The Family of Adela Marquin.

Adela was born on December 24, 1900 in Guaymas, Sonora, Mexico. Her racial background is Mexican-Yaqui.

The Yaqui's were sovereign people that lived primarily along the central coast of Sonora Mexico. The Yaqui people never surrendered to the Spanish or Mexican government authorities, period.

One of the final migrations of the Mexican-Yaqui people was in the early 1900's. thousands migrated to southwestern Arizona, California and even western Texas. They had always been at war with the "Spaniards" and then the Mexicans.

It was not until about 1939, under the Presidency of Cardenas was a peace treaty signed between the Yaqui Nation and the Mexican Government.

My Marquin family migrated to Los Angeles soon after 1900.

After her marriage to Frank Jordan, of British and Portuguese descent, and heir was born in Lisbon Portugal in 1884, and the marriage was ended by 1920. About 1934, she married a Francisco Velasquez. 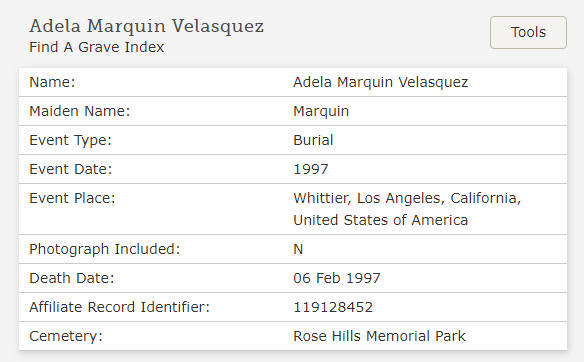