He was born in Villa de Toranzos, Burgos Spain. 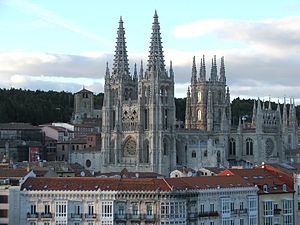 Burgos (Spanish pronunciation: [ˈburgos], is a city in northern Spain and the historic capital of Castile. It is situated on the confluence of the Arlanzón river tributaries, at the edge of the Iberian central plateau. It has about 180,000 inhabitants in the actual city and another 20,000 in the metropolitan area. It is the capital of the province of Burgos, in the autonomous community of Castile and León. Burgos was once the capital of the Crown of Castile, and the Burgos Laws or Leyes de Burgos which first governed the behaviour of Spaniards towards the natives of the Americas were promulgated here in 1512.

It has many historic landmarks, of particular importance; the Cathedral of Burgos (declared World Heritage Site by UNESCO in 1984),[4] Las Huelgas Reales Monastery and Miraflores Charterhouse. A large number of churches, palaces and other buildings from the medieval age remain. The city is surrounded by the Fuentes Blancas and the Paseo de la Isla parks.

Castilian nobleman, military leader, and diplomat El Cid Campeador is a significant historical figure in the city, as he was born a couple of miles north of Burgos and was raised and educated here.

The city forms the principal crossroad of northern Spain along the Camino de Santiago, which runs parallel to the River Arlanzón.

It has a well-developed transportation system, forming the main communication node in northern Spain. In 2008, the international Burgos Airport started to offer commercial flights. Furthermore, AVE high speed trains are planned to start in service in 2015.

The Museum of Human Evolution was opened in 2010, unique in its kind across the world and projected to become one of the top 10 most-visited museums in Spain. The museum features the first Europeans, which lived in this area 800,000 years ago.

Early humans occupied sites around Burgos as early as 800,000 years ago. When the Romans took possession of what is now the province of Burgos, the site had been a Celtiberian city. In Roman times, it belonged to Hispania Citerior ("Hither Spain") and then to Hispania Tarraconensis. In the 5th century, the Visigoths drove back the Suebi, then the Arabs occupied almost all of Castile in the 8th century, though only for a brief period, and left little if any trace of their occupation. Alfonso III the Great, king of León reconquered it about the middle of the 9th century, and built several castles for the defence of Christendom, which was then extended through the reconquest of lost territory. The region came to be known as Castile (Latin castella), i.e. "land of castles".

Burgos was founded in 884 as an outpost of this expanding Christian frontier,[6] when Diego Rodríguez "Porcelos", count of Castile, governed this territory with orders to promote the increase of the Christian population; with this end in view he gathered the inhabitants of the surrounding country into one fortified village. The city began to be called Caput Castellae ("Cabeza de Castilla" or "Head of Castile"). The county (condado) of Burgos, subject to the Kings of León, continued to be governed by counts and was gradually extended; one of these counts, Fernán González, established his independence.[7]

In the 11th century, the city became the see of a Catholic bishop and the capital of the Kingdom of Castile. Burgos was a major stop for pilgrims on their way to Santiago de Compostela[8] and a centre of trade between the Bay of Biscay and the south, which attracted an unusually large foreign merchant population, who became part of the city oligarchy and excluded other foreigners.[9] Throughout the 13th and 14th centuries, Burgos was a favourite seat of the kings of León and Castile and a favoured burial site. The consejo or urban commune of Burgos was firmly in the hands of an oligarchic class of caballeros villanos, the "peasant knights" of Burgos, who provided the monarchs with a mounted contingent: in 1255 and 1266 royal charters granted to those citizens of Burgos who owned horses and could arm themselves relief from taxes, provided that they continue to live within the city walls.[10] The merchant oligarchy succeeded the cathedral chapter as the major purchasers of land after 1250; they carried on their mercantile business in common with municipal or royal functions and sent their sons to England and Flanders to gain experience in overseas trade. A few families within the hermandades or confraternities like the Sarracín and Bonifaz succeeded in monopolising the post of alcalde, or mayor; a special court, the alcalde del rey was first mentioned at Burgos in 1281.[11] By the reign of Alfonso X, the exemption of the non-noble knights and religious corporations, combined with exorbitant gifts and grants to monasteries and private individuals, placed great stress on the economic well-being of the realm.

Abbey of Santa María la Real de Las Huelgas, was founded in 1180.
In the century following the conquest of Seville (1248), Burgos became a testing ground for royal policies of increasing power against the consejo, in part by encouraging the right to appeal from the consejo to the king. In 1285, Sancho IV added a new body to the consejo which came to dominate it: the jurado in charge of collecting taxes and overseeing public works; the king reserved the right to select its members. The city perceived that danger to its autonomy came rather from an uncontrolled aristocracy during royal minorities: Burgos joined the hermandades of cities that leagued together for mutual protection in 1295 and 1315. In the 14th century, official royal intrusion in city affairs was perceived as a palliative against outbreaks of violence by the large excluded class of smaller merchants and artisans, on whom the tax burden fell. The alguacil was the royal official instituted to judge disagreements.

On 9 June 1345, sweeping aside the city government, Alfonso XI established direct royal rule of Burgos through the Regimiento of sixteen appointed men.

In 1574, Pope Gregory XIII made its bishop an archbishop, at the request of king Philip II.

Burgos has been the scene of many wars: with the Moors, the struggles between León and Navarre, and between Castile and Aragon. In the Peninsular War against Napoleonic France, the siege of Burgos (between 19 September to 21 October) was a scene of a withdrawal for Duke of Wellington. Again in the 19th-century Carlist civil wars of the Spanish succession Burgos was the scene of a battle. During the Spanish Civil War, Burgos was the base of Gen. Franco's rebel Nationalist government. 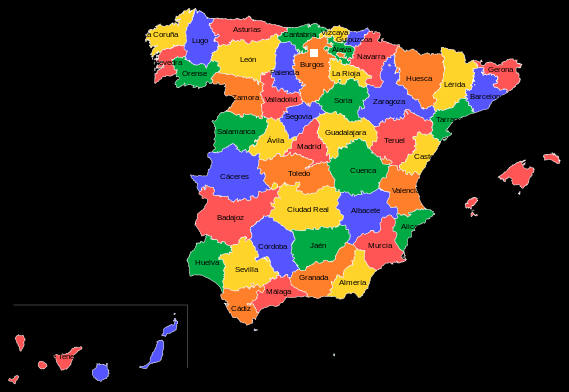