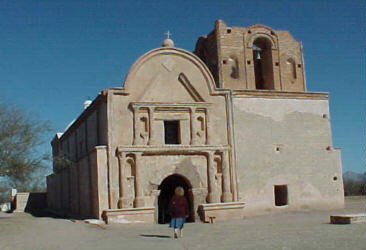 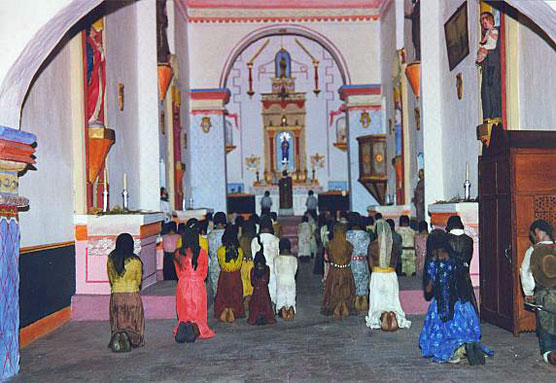 Ignacio Pacheco-(He was baptized in the Tumacacori Church), his parents, Jose Ruiz Pacheco
and Maria Romero lived in Tubac and apparently Ignacio was born in Tubac in the first week of
January, 1775, as in the record of the baptism, he was only a few days old when taken to the
church at Tumacacori.  The record of the parents, show them to continue living in the area,
San Ignacio at Tubac, as the Fort of Tubac was abandoned in late 1775.  The Military Fort
was moved to Tucson, but apparently, the Pacheco's continued, directly or in-directly to live
in Tubac for another 52 years.  There is a record of a mayor of Tucson being named Ignacio
Antonio Pacheco, in 1826.  His family moved to Tucson beginning with Guadalupe.
Guadalupe's son Refugio was born in Tucson. 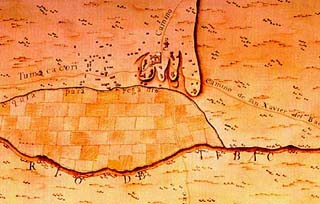 Highly possible; Ignacio Pacheco Zeballos, born 1708 in Nacosari.  Only other Pacheco found was a Francisco Pacheco, a "honored' soldier of Cocopera that retired to his home in Janos.

There was very little "living" of the Spaniards in the Guevavi area until about 1750.

THE INFORMATION BELOW MAKES THE CONNECTION BETWEEN THE FAMILY OF JOSE RUIZ PACHECO,
FATHER OF IGNACIO ANTONIO PACHECO.

Please click here for the excellent history of Tubac, and the surrounding areas.

OTHER PACHECO'S IN THE SAME TIME PERIOD

Guevavi was the area that the first Church established in Arizona by Father Kino.

Pacheco family received 1 of 2 land grants in Arizona in the 1680's from the King of
Spain.  This has to be verified as no records or references have been found, other than the Richard Pacheco records.

Presidio de San Ignacio de Tubac. (A) Located four miles north of Tumacácori, the Presidio de San Ignacio
de Tubac was founded in 1752 in response to a Pima revolt. The area had been a Pima village before becoming
a mission farm. The fifty cavalrymen garrisoned at this remote outpost were to control the Pimas, protect the
frontier from the Apaches and Seris, and further explore the Southwest. Juan Bautista de Anza II, second
commander of the presidio, staged two overland expeditions to Alta California from this place. The ruins of
his house can be viewed through an underground archeological exhibit at Tubac Presidio State Historical Park.
(NR) About ten acres of the original site are within the state park and 23 acres are in private ownership.
Thirteen acres of the private land are leased by the Center for Spanish Colonial Archeology. The Anza Trail
runs through this property.

Arizona Daily Star
Tucson, AZ
September 5, 1982
Family owned Spanish grant
Ida Braun Pacheco dies at 84
Ida Braun Pacheco, widow of a descendant of a pioneer Tucson ranching family, died at her home Friday after a long illness.  She was 84.
Her late husband, Richard M. Pacheco, started the Acme Cattle Co. west of Marana in 1934 and owned several ranches in Southern Arizona.  He died in 1976.
The Pacheco family owned one of two land grants made by the king of Spain in Arizona.  The grant, made in 1684, once extended from the Rincon Mountains to the east side of Benson.
Pacheco was a descendant of Ygnacio Antonio Pacheco, who obtained the first branch registry for cattle in Arizona from the king of Spain in 1813.
Mrs. Pacheco was born in Tucson in 1898.  She is survived by three daughters, Mary Pacheco and Norma Bustamante, both of Tucson, and Ida Fernandez of San Gabriel, Calif.; 11 grandchildren; and 10 great-grandchildren.
Funeral arrangements are pending at Tucson Mortuary.
Arizona Daily Star
Tucson, AZ
September 6, 1982
PACHECO, Ida Braun, 84, passed away September 4, 1982.  Mother of Mrs. Norma P. Bustamante, Mrs. Mary (Henry) Pacheco, Mrs. Alda (Hector) Fernandez of St. Gabriel, CA; also 10 grandchildren; 12 great grandchildren; and one great great grandchild.  Mrs. Pacheco was nominated to the Arizona Cattleman's Hall of Fame, she was a native Tucsonian, and her family has been in Tucson since the early 1800's.  Rosary will be recited Tuesday, 7:30 p.m. at the TUCSON MORTUARY, South Chapel.  Mass will be offered Wednesday, 9 a.m. at St. Augustine Cathedral.  Interment will follow in Holy Hope Cemetery.  Visiting hours will be Tuesday, 4 p.m. to 10 p.m. 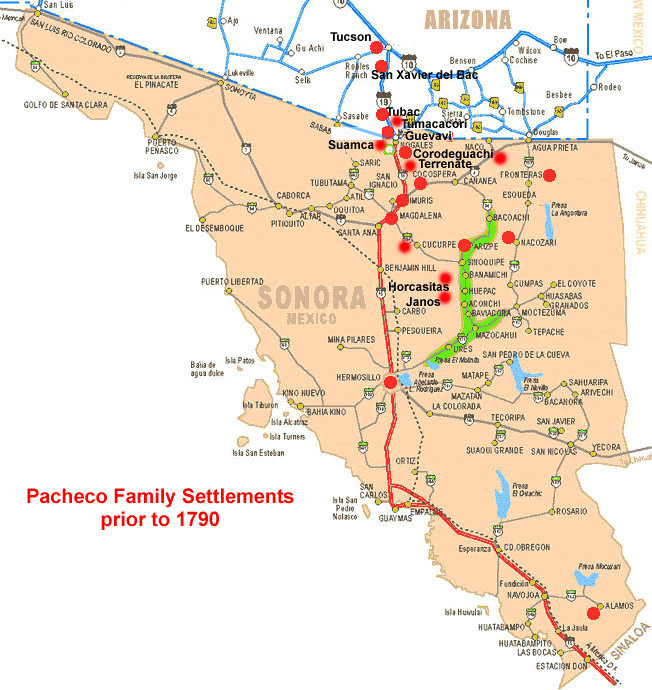