(A truly moving story of a boy/man that left "war-time" Genoa Italy in 1795, came to Mexico, ended up, in 1796, in the Presidio of San Francisco, helping in the building project!) After, ending up in Hermosillo around 1805, made his fortune by diving for pearls, banking and raising cattle.

A book was written about the Italians in Mexico, Francisco Monteverde was involved.

82 Lieutenant Robert W. H. Hardy, of Her Majesty's Navy, was commissioned in 1825 by a London company to seek pearl fishing grounds. In the course of his travels he visited one Signor Monteverde, a long-time resident of Pitic, Sonora, whom few
recognized any longer as a native of Italy. Hardy wrote that Monteverde had "a fat wife, a large family, a broken organ, numbers of prints, some good pearls and native gold." 33 Said to be one of the richest men in the area, he had formerly been engaged in pearl fishing. Apparently this was quite lucrative, for Hardy reported that Monteverde told him of an Italian priest who, with only $200 and a wooden diving bell, took $200,000 in native gold and pearls from the Gulf of California in two months' time. 84 Josiah Gregg told of visiting a fonda in Zacatecas in 1835. It was kept by an Italian, and Gregg procured "an excellent supper."35

This is the start of information on how a Francisco Monteverde, about 16 years of age, from the city of Genoa Italy, (excellent link here on the city) city of Christopher Columbus, sailed to the new world. The age corresponds with the age listed previously. How he ended up in Pitic, New Spain, will be interesting.

The above web site is how New Spain/Spain established the San Francisco area.

EXAMPLE; 166. The actual number of artillery and workers exceeded this amount. In fact, Roca headed a detachment of a dozen and a half workers, artificers, and artillerymen sent out from San Blas for San Francisco. He and Private Mariano Brito were the only married men. The majority of the force hailed from Mexico, except for Roca, another native of Catalonia from the town of Tarrega, Second Corporal Gregorio Martínez of Cadíz, Juan Marine of Tarrega in Catalonia, and two workmen, the carpenter Rafael Lledo of Palma and the artificer (author-scribe-writer) Francisco Monteverde from Genoa, Italy. The rest of the group included Miguel Brito, José Cano, Matias Guerrero, José Medina, José Osorio, José Sarco, and José Villaseñor (all artificers and workmen) along with artillerymen José Francisco Argüelles (first corporal), Mariano Mercado, José Peña, and Juan Zuniga. Most of the men were in their early to mid-twenties, with the exception of one 17-year-old (Monteverde), two 19-year-olds (Mercado and Medina), Roca who was 37, and Lledo who was 44. Report, Pedro Laguna, Royal body of Artillery, Department of New Spain, Mexico, October 15, 1795,

One of the reasons that Francisco Antonio Monteverde may have left Genoa in about 1795, was the turmoil of war by the French to the Genoa area, while the British continued to protect Genoa in continuing battles, especially by sea. There was a depression in the northwest area of Italy, including Florence. Things were not good. Even though Francisco was born in Florence, Genoa was the major area for the Monteverde's of Italy. In fact Napoleon, made a secret mission to inspect fortifications of Genoa, in 1795, for the war.

Apparently, he left Italy in 1795, probably had to get special help to get on a ship, arrived in Mexico, for whatever reason, as very few Italians were allowed in the New World of Spain. Genoa was once the possession of Spain, especially during the Cesare Borgia period.

He probably took a job building the defenses of the Presideo of  San Francisco, at such a young age, for what ever reason, it simply was not safe in that area.  He probably went from Vera Cruz to San Blas, took a ship to San Francisco. Now, how he was able to emigrate to Hermosillo is another story, well worth researching.  He was a MAN'S MAN.

SARA MONTEVERDE MORALES was born 1860. (HER DAUGHTER, MARIA, MARRIED ALVARO OBREGON, PRESIDENT OF MEXICO, "REPUBLICAN LINK") They had a son, that was Governor of Sonora in 1955. 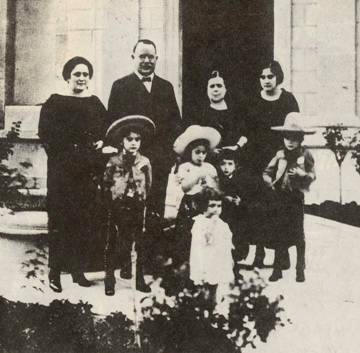 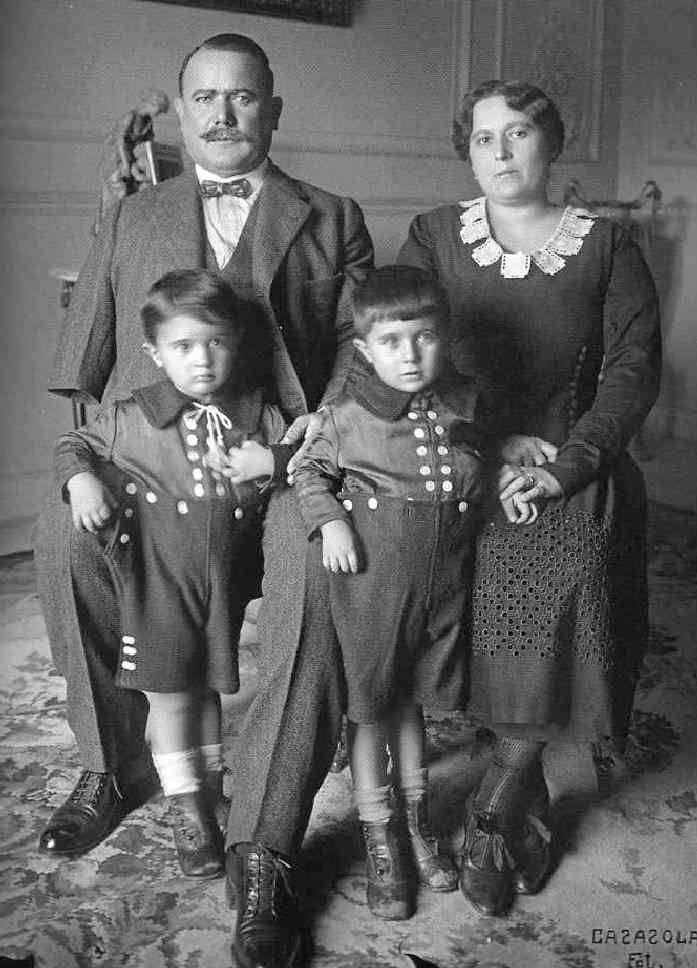 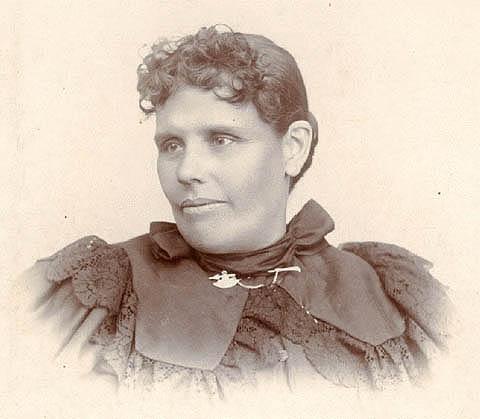 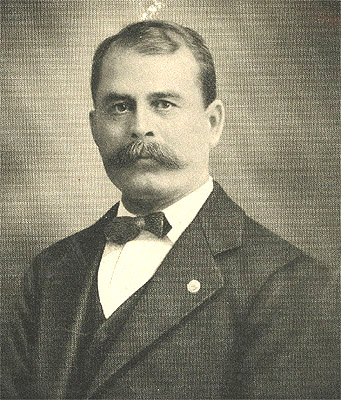 AMELIA MONTEVERDE MORALES was born in Hermosillo, Sonora; México. 1863. She married LUIS EMETERIO TORRES MELENDEZ in Hermosillo, Sonora; México., January 10,1884. LUIS was born in Mineral de Guadalupe y Calvo, Chihuahua; México. March 02,1844. LUIS was the son of JOSE TORRES DEL RAYO and FRANCISCA MELENDEZ. LUIS died September 09,1935 in Los Angeles, California; México., at 91 years of age. He was six times, the Governor of Sonora, military hero, ousted by President Madero. Picture below is of the couple in Los Angeles after their escape from Mexico. 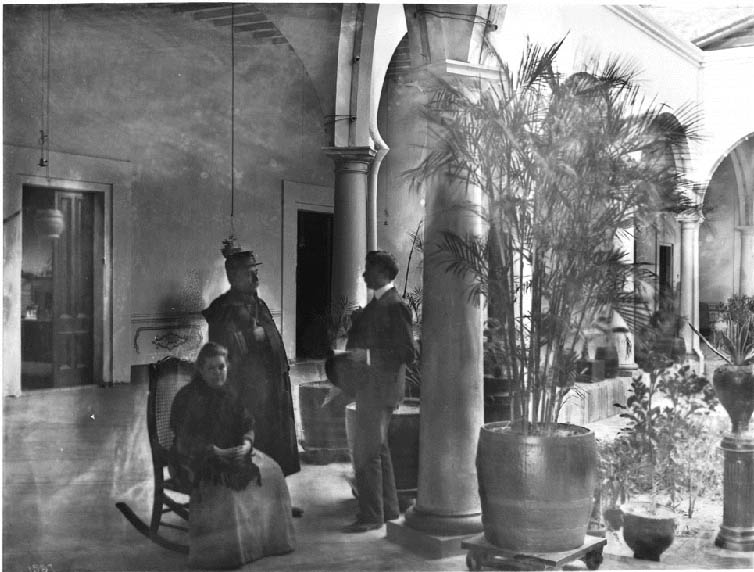 Ma. del Refugio Angela MONTEVERDE MORALES was born June 15,1869 and died in 1963 . She Married Tomás Robinson Bours Goyeneche (1858-1933 ). For information on the marriage of Angela to Tomas, please
click here, a very interesting story. THEIR FAMILY ALSO PRODUCED A GOVERNOR OF SONORA. 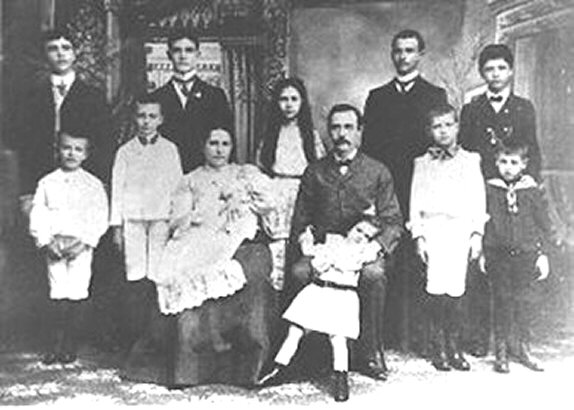 The origin of Hermosillo dates from 1700, when the towns of Our Lady of the Pópulo, Our Mrs. of Los Angeles were based and the Santísima Trinidad of the Pitic, inhabited by seris, tepocas and pimas low. Years back internal difficulties between the Indians had appeared seris and tepocas with pimas low and like consequence, had moved away of their functions.

The original intention of our city fué the one to contain the Seris Indians and to protect the Hispanic expansion with the name of Real military prison of San Pedro of Conquista , thus was named by its founder the lieutenant Juan Baptist of Escalante .

In 1718, by orders of the governor, Don Manuel of San Juan and Santa Cruz, repobló the town of the Santísima Trinidad of the Pitic, whose inhabitants had moved away in their majority; the 29 of September of 1725, seris seated in pópulo rose in are military and stuck the town of Opodepe, victimando to 22 people. It was persecuted to them with the intention of punishing them until seris requested La Paz in January of 1726, and were seated in pópulo and the denominated points to Lares and Moraga. Given Poteriormente the uncertainty by the bellicosity of the natives, formed the military prison of the Pitic.

It was during the government of Corbalá when a channel was opened to water territories of the neighbors of the Pitic. At the same time the repartimiento of lots occurred to the inhabitants, leaving assured its subsistence.

The 9 of February of 1825, Villa of the Pitic fué instituída in party head, employee of the department of horcasitas; and the decree of the Legislature of the State of the West of the 5 of September of 1828 cleared its primitive name to him and it gave the present name him of Hermosillo, with the political category of city, in honor of general Jose Maria González de Hermosillo.

From the 14 of March of 1831, it was seat of the supreme local powers that were changed to the city of Arizpe the 25 of May of 1832. The Núm decree. 57 of date April of 1879 arranged the following thing: it is temporarily transferred the State Capital and the residence of the general offices to the city of Hermosillo.

The 4 of November of 1881 the railroad was finished that united to Guaymas and Hermosillo with Walnuts and the border of the North American southwest, the transport facility repelled in a new development of the northwest: it flowed the investment in mining and commerce and resurgío agriculture, and from then Hermosillo it managed to consolidate like a pole of economic and social development.

1700 Origin of the Santísima Trinidad of the Pitic, given by Juan Escalante Baptist.

1706 Repoblamiento of the Pitic, by general Antonio Yearling calf Grandson.

1716 Signaling for the cultivated field of of earth by the natives, according to the law.

1718 For the second time, repoblamiento of the Santísima Trinidad of the Pitic.

1726 indigenous Establishments with 160 people in the Pitic.

1729 the order is sent to require information on the state of the Indians in the region of the Pitic.

1741 Appointment of Don Agustín de Vildósola like governor of the Sinaloa and Sonora provinces.

1750 Destitution of Vildósola like governor, becoming to notice that it would have to reside in the Pitic; appointment of the new governor.

1763 Situation of a defense company, to assure the stability its inhabitants.

1772 Opening of a channel to water territories of the neighbors of the Pitic, by order of Don Pedro Corbalá.

1772 Repartimiento of the lots to the inhabitants.

1787 Construction of the first church.

1822 Construction of the parochial temple.

the 1825 villa of the Pitic is instituted in Head of Party.

1828 Cambio' the original name, being called Hermosillo, with the political category of city, in name of general Jose Maria González Hermosillo.

1831 Establishment of the local powers.

1832 Change and change to Arizpe, of the local powers.

the 1838 governor Jose Maria Gándara changes the capital to Ures, without legal authorization.

1842 Paschal Don Iñigo constructs the Chapel of the Carmen.

1843 Declaration of capital of the department of Sonant.

1846 it is summoned to elections for local powers.

1847 the new legislature settles in Ures.

1852 Action military between Mexican forces and those of Count France's Rouset de Bulbon.

1866 Nace in the city of Hermosillo, Rodolfo Campodónico musician-composer.

1879 the capital to the city of Hermosillo is transferred temporarily; the interinato becomes definitive.

1917 one settles down in the constitution that the powers of the state must reside in Hermosillo.

1952 Opening of the coast of Hermosillo.

Some History of Hermosillo

The Presidio was then moved to El Pópulo in 1750 (San Miguel de Horcasitas), which minimized the activities in this settlement.

In 1770 Don Pedro de Corbalán, by orders of the Virrey Marqués de Croix, took charge of the government of the Sonora and Sinaloa provinces.

By the end of the 18th. century, the old Presidio de San Pedro de la Conquista del Pitic evolved to what it became known as Villa del Pitic.

It was on the 5th. of September of 1828, in honor of the mexican independence insurgent José María González Hermosillo , that the Villa del Pitic was given the name of Hermosillo.

Hermosillo and the capital of the State of Sonora

The State of Sonora officially was founded the 13th. of March of 1831, and Hermosillo was its first capital for about 14 months. Then the capital moved to Arizpe the 25th. of May of 1832.

Again in 1843, the centralist government in Mexico, declared Hermosillo the capital of the now Department of Sonora. It didn't take long for the main capital offices to return to Ures where they had been since 1838.

The 26th. of April of 1879, Hermosillo provisionally hosted the capital state offices. Officially it was until the 15th. of September of 1917, with the approval of the State Constitution, stated that the old Villa del Pitic was going to be definitively, the capital of the State of Sonora.

The municipality is located to the west of the state of Sonant, its head is the population of Hermosillo and 29° is located in the parallel 05' of North latitude and the meridian 110° 57' of west longitude from Greenwich to a height of 282 meters on the level of the sea.

Colinda to the northeast with Carbó and San Miguel de Horcasitas; to the east with Ures and Mazatán; to the Southeastern with Colorada and Guaymas; to the northwest with Pitiquito and the southwest with the gulf of California.

It has a surface of 14.880,2 kilometers square, that represents the 8,02 percent of the state total and the 0,76 percent in relation to the nation; the most important localities, in addition to the head are: German Miguel, San Pedro the Saucito, Kino Bay, New Kino, the Victory and the Sleeve

The municipality of Hermosillo is located in the western region of the State and is contiguous to the North with the municipalities of Pitiquito, Carbó and San Miguel de Horcasitas, to the East with Ures and the Red one, to the south with Guaymas and the west with the Gulf of California.

The territorial surface is of 14.880,2 km 2 and that represent the 8 percent of the state territory. 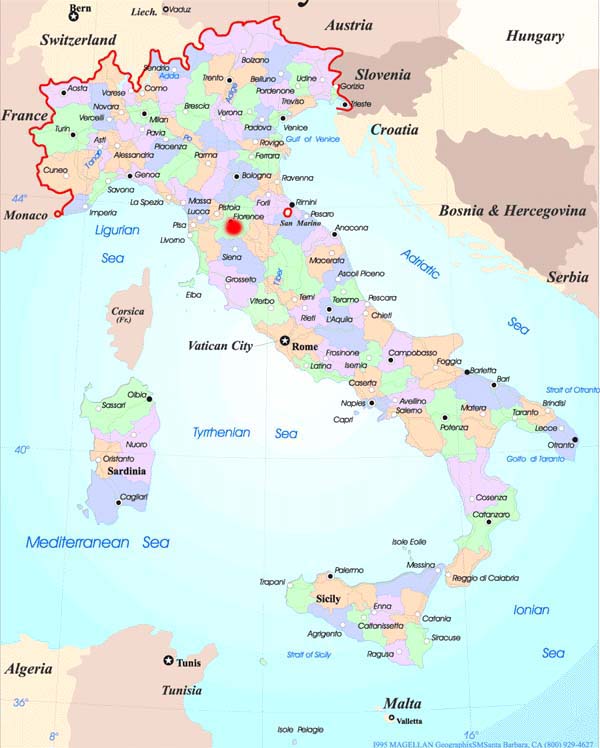 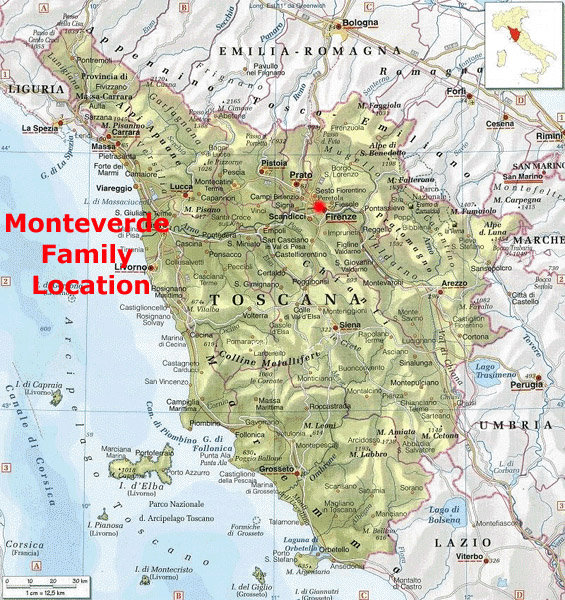