Tumacácori is derived from two Pima words, chu-uma and kakul, probably having reference to a flat, rocky place. Father Kino established it as a mission in January 1691, one day before Guevavi, making it the oldest mission site in Arizona. For many years, though, it was a visita or visiting station of the mission headquarters at Guevavi. During most of those years, it was located on the east side of the Santa Cruz River, and services were held in a small adobe structure built by the Pima inhabitants of the village. It was originally called San Cayetano de Tumacácori. After the Pima rebellion of 1751, the mission was moved to the present site on the west side of the river and renamed San José de Tumacácori.  Here the first actual church edifice was built.

Father  Antonio de los Reyes on 6 July 1772 submitted a report on the condition of the missions in the Upper and Lower Pimeria Alta.  This was his report on San José de Tumacácori as translated by Father Kieran McCarty.

The village of San Jose at Tumacácori lies seven leagues to the south of Guevavi and one from the Presidio of Tubac, in open territory with good lands.  In this village they have a church and house for the Missionary devoid of all ornament and furnishing.  According to the Census Book, which I have here before me, there are twenty-two married couples, twelve widowers, ten orphans, the number of should in all ninety-three.

In 1775 the Anza Expedition passed through Tumacácori on its way to the Tubac Presidio.  What the mission supplied the Anza Expedition in tangible goods in unknown.  However, it is known that it provided room and board for priests associated with the group for eight days between October 15 and 23, 1775 while last minute preparation were being made at the Tubac Presidio staging base for the final push into the wilderness.

Padre Pedro Antonio de Arriquibar, the resident missionary at Tumacácori, hosted the group of four other priests.  Father Pedro Font, missionary from San José de los Pimas south of present-day Hermosillo was assigned as chaplain for the group and would accompany Anza all the way to San Francisco and back to Horcasitas.  Father Garcés of Bac near Tucson and Eixarch of Tumacácori were assigned to go to the Yuma settlements on the Colorado River to begin preparations for the establishment of missions there.  And finally, Padre Felix Gamarra was assigned to take Garcés place at Bac.

One or more of these priests walked to Tubac each day to celebrate Mass for the members of the traveling colony.  And, all five were there for Mass held on the morning of October 23rd when the expedition departed. 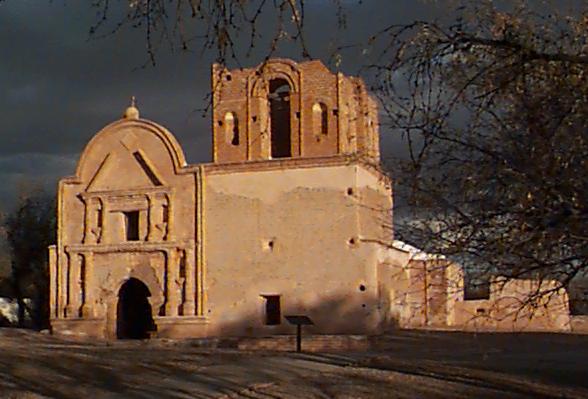 The Franciscans began work in 1800 on an ambitious undertaking - a church that would match the frontier baroque glory of the celebrated Mission San Xavier del Bac not far to the north.  Under the direction of a master mason, a maestro de albanil, a crew of Indian and Spanish laborers laid five-foot thick cobblestone foundations that year, but construction ground to a halt as funds dried up.  Over the next few years they were able to add a few courses of adobe bricks, bringing the walls up to seven feet.  These were plastered inside and out and decorative handfuls of crushed brick were pressed into the wet plaster.

It was not until 1821 that work truly resumed.  An enterprising Franciscan, Father Juan Bautista Estelric, sold 4,000 head of the mission's cattle to a local rancher, Don Ignacio Perez, and with the first payment hired a new master and pushed the work ahead.  The walls were raised to 14 feet, but the rancher stalled on his payments and construction again ceased.  Two years later, Father Ramon Liberós, a persistent friar, finally got the rancher to pay his bill, and work resumed.  Within a few years the church was almost completed, although the bell tower was never capped with its dome.  The church must have been a striking landmark in the flat Santa Cruz Valley, with its embellished and painted facade and plaster walls embedded with crushed red brick.