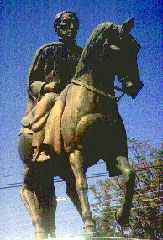 Jesuit missionary Father Eusebio Francisco Kino, was one of the early Spanish explorers of the deserts of the American Southwest. In addition to establishing a number of missions in the New World, he proved that Lower California was a peninsula, the Baja Peninsula -- not an island as had previously been believed.

Eusebio Kino was born in Segno, in the Val di Non, a valley in Tirol (now in Italy), on Aug. 10, 1645. He distinguished himself in the studiy of mathematics, cartography, and astronomy in Germany and taught mathematics for a time at the University of Ingolstadt. He became a member of the Society of Jesus (Jesuits) in 1665. His work as a missionary began in 1678, and he was assigned to Spain's colony in Mexico.

Kino arrived in Mexico City in the spring of 1681. After an abortive mission to Baja California in 1683, he began his longtime mission to the Pima Indians in Pimeria Alta, a district comprising present-day southern Arizona and the northern portion of Sonora State in Mexico.

In 1687, Father Kino established his first mission among the rural Indians of Sonora at Nuestra Senora de los Dolores. It became the headquarters for his explorations, as well as for the founding of other missions, including San Xavier del Bac (1700) near Tucson, Guevavi and Tumacacori (now a U.S. National Monument).

In 1691, Father Kino made the first of about 40 expeditions into Arizona. In 1694, he was the first European to visit to Hohokam ruins of Casa Grande (now a national monument). He is also said to have explored the sources of the Rio Grande, the Colorado and Gila rivers. His explorations of the area around the mouth of the Colorado River in 1701 convinced him that Baja California was a peninsula, not an island. His 1705 map was the standard reference for the southwestern desert region for more than a century.

Father Kino helped the Pima Indians diversify their agriculture and aided them in their constant wars with the Apaches, while opposing Indian enslavement in the silver mines of northern Mexico. His Favores celestiales (1708) was translated into English as the two-volume Kino's Historical Memoir of Pimería Alta in1919 (reissued 1948). Father Eusebio Kino died at Mission Magdalena in Sonora on March 15, 1711.

There appears to be a correlation between the Father Kino Churches and the Spanish settler families and soldiers.  The states of GUANAJUATO, ZACATECAS (city of Pacheco) and Magdalena Sonora should be investigated, of course leading to Mexico City, Havana Cuba and Seville Spain.  From Seville Spain, there are many references of the Pacheco's heading for the new world in the 1500-1600 and 1700's.

LIST OF FATHER KINO MISSIONS THAT COULD CONTAIN THE RELEVANT FAMILY INFORMATION.

"Father Kino, whose first visit to the O'odham community of Wa:k (Bac) was in 1692, began to build a church here in 1700.  It apparently never got beyond its foundations, however, and in 1751 the Jesuit Father Visitor Jacobo Sedelmayr said of the Indian community, 'It is still very backward without a catechist, without obedience, and without any church other than a ramada and a wretched house.  It is clear to see that this village has been visited very little.'

"San Xavier's first church, other than a ramada, was a flat-roofed, hall-shaped adobe building begun shortly after the arrival of Jesuit missionary Father Alonso Espinosa in 1756.  It was serviceable at least by 1763, although given the fact that Espinosa failed to level the site and there were no stone foundations, there must have been structural problems from the outset.

"The adobe church built by Father Espinosa was the one inherited by Father Francisco Garcés when he arrived at San Xavier in 1768 as its first Franciscan minister." (The Pimeria Alta, The Southwestern Mission Research Society)

Father  Antonio de los Reyes on 6 July 1772 submitted a report on the condition of the missions in the Upper and Lower Pimeria Alta.  This was his report on San Xavier del Bac as translated by Father Kieran McCarty.

The mission at Bac with one outlying mission station is located on a long, flat lowland.  To the east lies a land, little known and occupied by the wandering and warlike Apache nation.  To the west lie the settlements of an infinity of pagan Indians, meek and docile, who people the land all the way to the Gulf of California, a distance a little more than a hundred leagues.  To the south at distances of eighteen and twenty leagues lie the two missions at Guevavi and Suamnca and the Presidios of Tubac and Terrenate.  To the north lies the little-known land stretching some forty leagues to the Gila River.

The village of San Xavier at Bac is situated on open ground with an abundance of water and good land where the Indians cultivate a few small fields of wheat, Indian corn, and other crops.  The church is of medium capacity, adorned with two side chapels with paintings in gilded frames.  In the sacristy are four chalices, two of which are unserviceable, a pyx, a censer, dish and cruets, a baptismal shell, all of silver, four sets of vestments of various colors, with other ornaments for the altar and divine services - all very poor.  According to the census Book, which I have before me, there are forty-eight married couples, seven widowers, twelve widows, twenty-six orphans, the number of souls in all - two hundred seventy. 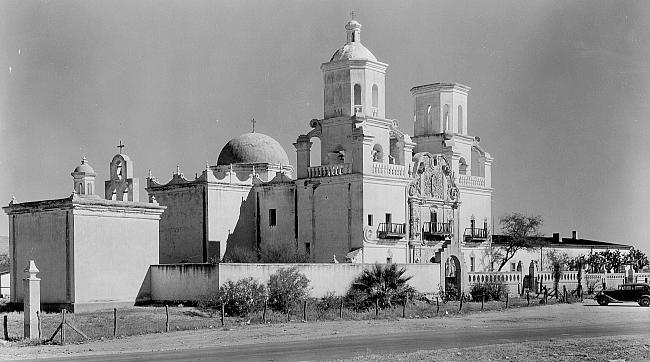 "Improvements in the architectural situation at San Xavier had to await the arrival in 1776 of Father Juan Bautista Belderrain, a Basque friar.  Building San Xavier was an expensive proposition, but Father Velderrain was able to borrow $7,000 pesos - the equivalent of more than twenty years of a missionary's salary - from a businessman, Don Antonio Herreros.  The friar's only collateral was wheat from crops not yet even planted - almost as if he expected Don Antonio to join him in his vows of poverty.  The good Basque was never able to repay the debt; he died at San Xavier in 1790, the new church still undecorated and otherwise unfinished.  It was Velderrain's successor at San Xavier, Father Juan Bautista Llorens, who oversaw completion by 1797.

"Sometime early in the nineteenth century, probably in the 1820s, Father Espinosa's old church was torn down and its adobes, wooden columns, and ceiling beams were re-used to build a convento wing extending east from the east bell tower of the Franciscan structure.  Today's church itself has interior and exterior walls of fired bricks set in lime mortar with an interior core filled with stone rubble over which lime mortar was poured periodically as the walls went up.  The east bell tower, as well as interior decoration of a room apparently intended for large meetings of friars, was never finished.

"After the new temple at San Xavier was ready for use in 1797, Father Llorens directed his attention toward other building projects.  One was the Tucson visita where he began either a renovation or a replacement for the Garcés chapel." (The Pimeria Alta, The Southwestern Mission Research Society)
This was Father Antonio Reyes' report on San Cosme y Damian de Tucson, a visita of Bac, as translated by Father Kieran McCarty.

The outlying mission station of San Jose at Tucson is located six leagues to the north of San Xavier.  There is no church or house for the Missionary.  To take advantage of the fertility of the soil there are gathered together to form a village an increased number of Indians, both Christians and pagan.  They have not been able to draw up a census book, but they judge that there are more than two hundred heads of families.