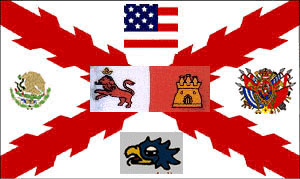 After toooooooooooooooo much research based on the information from the Internet and other books, there is a possibility of the following sequence.

Because of my belief that our New Spain Pacheco Clan came from the south, starting in the Jalisco area, maybe after arriving with the Nunez expedition about 1539, and there was a Juan Pacheco from Salamanca Spain there and a Nuno De Chavez Pacheco (his father was Francisco De Chavez Pacheco) from Caceres Spain, that was in the initial party of Nunez in 1529. But, in much further research, I was wrong, as the Church records of Magdalena were destroyed, or most of them, so the southern route has now been abandoned  I have a cousin, Pacheco in Guadalajara, that tried, but no information discovered.

So now, the effort must be in Janos. The present state of Chihuahua.

The Jalisco area became very popular, and also became a "dropping off" point for the adventurers to pioneer the north. If the "pioneers" went north from Mexico City and Durango, it meant that they were going to "New Mexico".  In those days, I don't think that they would go east to west, as the trading posts and trails were established going south to north.  This could be, because of the mountain ranges separating the east to west travels.

The Pacheco "adventurers", after arriving and settling the Jalisco area, probably came from Mexico City, before that, Puebla after arriving in Vera Cruz.  After the Nunez expedition destroyed and conquer the indigenous civilizations in the Jalisco/Michoacan areas, and after the "rested" settlers learned about the "mineral" strikes in Sonora, they headed north and finally ending up at the Guevavi area, in about 1750.

But, the other entrance to the Guevavi area would be from Janos, about 100 miles east of that area. The history of Janos, during the 16th century, probably holds the key to the Pacheco Family. In the year 1700, there were over 100 Pacheco's in the New Spain/New Mexico area, versus 1 in the Nacosari/Guevavi area. And they all had to pass through Janos. There was also a Janos in Sonora, south of Guevavi.

But, before 1750, there was a Pacheco family in Terrenate, about 35 miles directly south of Guevavi.  There was a family headed by Juan Antonio Pacheco.  I can't find the records from my limited abilities to find or authenticate any of the other children. There is one male that he sired, Juan Salvio Pacheco, born in Terrenate in 1729.  That is the Pacheco that traveled with "De Anza" to the San Francisco area in 1775. But, if Juan Salvio and Ignacio Antonio we directly related, I don't think that Ignacio Antonio would have stayed back in Tubac.  But, the Pacheco's of our family, good or bad, have always been "independent".

Juan Salvio died in the city of San Jose in 1777. By the way, we had "ancestor cousins" by the names of Bojorquez and Romero that traveled with the "De Anza" party to California. But, apparently, Juan Salvio Pacheco stayed in the Terrenate/Corodéguachi area into the 1760's, until moving to Tubac, because of the constant wars and epidemic's.  It was about that time, that Tubac was being built up as a safe place to "live".

If Juan Antonio had other male children, and he was the right age to be the father of a different Juan Salvio, as there were two in the same area, at about the same time, which is a possibility, then he could be the father of Juan Jose, the father of Jose Ruiz, the father of Ignacio Antonio. Again, there was a great amount of "fighting" between the area of Guevavi and Terrenate, and there is a likelihood that records were destroyed. The "Ruiz" name, I think, came from a great friend of Juan Joseph Pacheco.  Maybe through "fighting" together etc. etc..  I think that Juan Joseph and his pregnant wife, after being caught right in the middle of the "plagues" and Pima uprising escaped southeast in the late spring of 1751, and maybe went south, as far as JANOS, about 40 miles south of Guevavi. The town of Janos at that time, was 'full" of Ruiz's. Juan Jose Pacheco was born in 1751.

No records of Rafael or his sons' Francisco or Ignacio Pacheco Zevallos. Rafael was born about 1680 and Ignacio about 1708. Francisco was born earlier or later.

My bet would be on the Pacheco Zevallos Family.

The following were the theories until I found Francisco Pacheco Zevallos of Burgos Spain.

His "maybe" grandfather could have been  Diego Pacheco, married in Jalisco in 1602.  From this point, the other Pacheco's could have been born in Mexico City.  Also, Guanajuato and Puebla were very popular city's for the Pacheco's.  In fact, the Romulado Pacheco family came from Guanajuato, he being the first Hispanic California Governor under American rule..

A. Two other men named Francisco Pacheco who were prominent citizens of New Spain in the late 1500s were:

Diego Orozco from Toledo, Spain, legitimate son of Francisco de Orozco, "alguacil de la Inquisición" and Leonor Cornejo, was at the founding of Guadalajara too. So was Antonio Pacheco de Montejo, son of Francisco Pacheco and Catalina Pacheco. He assisted in the pacification of Nueva Galicia with Pedro de Alvarado.

All of the other first Spanish male names with Pacheco have to be cross referenced, and that will take much more time.

Another possibility is; No record of births prior to 1755. Maybe his brother or cousin was Juan Jose.