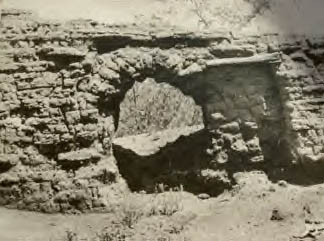 Guevavi was the first mission built in Arizona by Father Kino.  Above are the ruins of the church.  Several members of the Pacheco family are buried nearby.

In 1690, Father Kino, who had established several other missions was visited by Father Juan Maria de Salvatierra, who had been sent by his superiors as visitador general. These two missionaries, says Francisco Velasco, were followed by Indians, asking to be instructed and admitted as members of the Catholic religion. Among them were the Sobahpuris, who lived on the San Pedro, and had come over a distance of 200 miles to ask the priests to follow them to the place called Guevavi, where they had their villages. Their petition was granted. The missionaries followed them and founded for their tribe a mission which was given the name of the place. This mission, now abandoned for a long time, was the first established on the soil of Arizona. It is in the same region that the missions of Tumacacuri and San Xavier del Bac were subsequently founded, along the course of the Santa Cruz River. According to the Rt. Rev. Thomas O'Gorman, the church of Guevavi and that of San Xavier del Bac would have been built by Father Kino in 1687.

In 1694, Kino visited the Pima Indians in the neighborhood of the Casas Grandes, where he established two missions, the Immaculate Conception and St. Andrew.

The above is taken from Salpointe (Soldiers of the Cross), but in an appendix to Garces Diary, by Elliott Coues, I find the following:

‘‘In December of that year (1690), Father Juan Maria de Salvatierra, was appointed superior and visitador of Sinaloa and Sonora; he came to Dolores whence he went with Kino to the other places above named (San Jose de Himeris and San Ignacio); whence the two congenial spirits pushed further into Pimeria Alta, laying great plans for spiritual conquests to be extended to California and elsewhere. Ortega, pp. 248–252, names places visited on this entrada of 1691 as follows: From Dolores by way of Santa Maria Magdalena pueblo and a land called El Tupo to the mission of San Pedro y San Pablo de Tubutama (on Rio Altar); place still so called, and probably in 1691 not yet a regular mission, though Kino may have operated there; thence to Saric (still so called on the same river), and Tucubabia in the same vicinity.

Here they were met by a delegation of Sobaipuris, from the region about the modern (San Cayetano de) Tumacacori in southern Arizona, begging for padres; the fathers determined to go to (acercares) the Sobaipuris, and did so, says Ortega, p. 249, reaching in 15 leagues the rancheria called Guevavi where, in Ortega's time (al presente—1752) there was a mission; but it does not appear that Guevavi was the place where the Sobaipuris were met or a mission was then founded; and all those who so state must have misread their Ortega. However, the latter clearly states that the priests pushed on to San Cayetano Tumacacori (sic); and this place being close to Tubac, Kino now makes his first entrada into Arizona, at or near our recent Fort Mason, on the Santa Cruz river. The fathers then went to Santa Maria de Suamca, a place almost on our boundary, east of Los Nogales; and thence to Cocospera, easily found on a modern map. There they separated, Kino tarrying awhile, and Salvatierra returning from his extended tour of inspection.’’

In 1692 Kino made his second entrada into Arizona, early in September, pushing on as far as San Xavier del Bac, and returning to Dolores on December 11, 1692.

In 1694 he was informed by some Indians from Bac of the Casas Grandes on the Gila, and went alone to examine them. This time he reached the Gila and said mass in the Casas Grandes, and he was, according to Dellenbaugh and other noted modern authorities, the first white man to view these ruins.

In November, 1697, was undertaken the first formal exploration into Arizona of which any detailed account survives. Of this expedition, Bancroft says: ‘‘Lieutenant Cristobal Martin Bernal, with Alferez Francisco Acuma, a sergeant, and twenty soldiers, marched from Fronteras via Terrenate and Suamca, while Kino and Mange with ten servants came from Dolores. The two parties united at Quiburi, not far from the site of the modern Tombstone; Coro, a Sobaipuri chief, with thirty warriors, joined the expedition, and all marched down the Rio Quiburi, since called the San Pedro, to its junction with the Gila, now so called in the records for the first time, though, as we have seen, the Gila province of New Mexico, was named as early as 1630. Down the main river went the explorers to and a little beyond the Casa Grande, which is, for the first time, described and pictured by simple drawings in the diaries. From the Gila they returned southward up the river, since called the Santa Cruz, by way of Bac and Guevavi, reaching Dolores at the beginning of December. They had marched 260 leagues, had been warmly welcomed everywhere, had registered 4,700 natives, and baptized 89, besides conferring badges of office on many chieftains.’’

Space does not permit me to follow all the wanderings of this tireless explorer, who made altogether thirteen entradas into Arizona. Concerning the last expeditions of Father Kino into Arizona, and the Jesuit administration in Arizona, Engelhardt says: ‘‘

In April and May, 1700, Fr. Kino was again at Bac and laid the foundation of a large church, which the natives were eager to build, but respecting the further progress of which nothing is known. In September Fr. Kino was in the Yuma country, and gave the name of San Dionisio to a Yuma rancheria at the junction of the Gila with the Colorado. In 1701 Fr. Kino and Fr. Salvatierra again appeared at Bac and Tumacacori. Some time after the venerable explorer passed from Sonoita to the Gila and the Colorado and visited the Yumas in their rancherias. Early in 1702, Fr. Kino made his last trip to the Gila and Colorado, and this was also, as far as known, the last time he crossed the Arizona line. ‘‘There is no satisfactory evidence,’’ said Bancroft, ‘‘that Arizona had either a regular mission or a resident Jesuit priest before Kino's death in 1711. A few rumors of padres stationed there can be traced to no definite source; and the whole tenor of such records as exist is against them.’’

After Fr. Kino's death, for more than twenty years, no Spaniard is known to have entered Arizona. It is not unlikely that a missionary may have visited the rancherias of the Santa Cruz valley, but there is no proof of such trips into Arizona. All communication gradually ceased; the Gila tribes forgot what Fr. Kino had taught them, and even the nearer Pimas and Sobaipuris lost much of their zeal for mission life. Only two or three Jesuits are known to have worked in the field of the Pimeria Alta near the Arizona line before 1730.

In 1731 there came a small re-enforcement of Jesuits; two of them were sent to the north and effected what may be regarded as the first Spanish settlement in southern Arizona. Fr. Felipe Segesser took charge of San Xavier del Bac, Fr. Juan Baptista Grasshoffer of San Miguel de Guevavi, which from this time may be regarded as regular missions, the other rancherias becoming visitas or missionary stations. It is probable that during the rest of the Jesuit period, the two missions were but rarely without priests. Fr. Grasshoffer died; Fr. Caspar Steiger was at Bac in 1773–1736; and in 1750 the missionaries were Fr. Jose Carucho at Guevavi, and Fr. Francisco Paver at San Xavier del Bac. In 1736–1737, Fr. Ignacio Keller of Suamca, in Sonora, made two trips to the Gila and visited the Casa Grande. He found that many of the rancherias of Kino's time had been broken up.

In 1743, Fr. Jacob Sedelmair of Tubutama reached the Gila and in the following year attempted to visit the Moquis in the north, but owing to the unwillingness of the Indians to guide him, he did not get beyond Bill Williams' Fork.

In 1750 occurred the second revolt of the Pima tribes, in which two missionaries at Caborca and Sonoita, were killed, as were about 100 Spaniards. Bac and Guevavi were plundered and abandoned, but the two Jesuits escaped to Suamca. Peace was restored in 1752 and the missions reoccupied in 1754.

During the remaining years of the Jesuit period, 1754–1767, the missions of the Pimeria Alta barely maintained a precarious existence. ‘‘A few neophytes were induced to remain faithful, but the natives lived for the most part as they pleased, not openly rebellious, nor disposed to molest the padres, so long as the latter attempted no control of their actions, and were willing to take their part in quarrels with settlers or soldiers. Missionary work was at a standstill.’’ Exactly how long the missions had been abandoned after the revolt of 1750 is not known, but in 1763 Fr. Alonzo Espinosa was in charge of Bac, as he was still at the time of the Jesuit expulsion in 1767.

At Guevavi the missionaries were Fr. Ignacio Pfefferkorn in 1763, Fr. Jimeno in 1764, and Fr. Pedro Rafael Diaz in 1767. The rancheria of Tucson was a visita of Bac in these years, and a few Spanish settlers seem to have lived there; but in 1763 it was, like the mission, abandoned by all except a few sick and infirm Indians.

There were also nearly 200 Spanish settlers at Guevavi, Santa Barbara, and Buenavista. The missionary stations at Tumacacori and Calabazas were composed of Pima and Papago neophytes; but the latter had run away in 1763. Respecting the expulsion of the devoted Jesuit Fathers by the Free Mason government of Spain in 1767 nothing is known, except the names of the three Fathers Espinosa, Dias and Barera, the latter at Suamca. The whole number of neophytes in 1764–1767, seems to have been about 1,250.

From the Spanish names on early maps, the conclusion has been drawn that, up to the Gila Valley, Arizona was covered with prosperous Spanish missions and settlements which had to be abandoned later in consequence of Apache raids; but the truth is, there was no Spanish occupation beyond a narrow region of the Santa Cruz valley, and even there were only the two missions Bac and Guevavi, with a few rancherias de visita under resident missionaries from 1732, or possibly 1720, and protected in their precarious existence by the Tubac presidio from 1752.

The Spanish names of saints were simply those applied by Kino and his associates to the rancherias visited on their exploring tours, whose inhabitants, in some instances, were induced to make preparations for the reception of the missionaries promised, but who never came. It has also been the fashion to regard Tucson as a more or less prosperous town from a very early time. Some writers even date its foundation in the sixteenth century, though, as a matter of fact, it is not heard of as an Indian rancheria till the middle of the eighteenth century, and was not properly a Spanish settlement till the presidio was moved there in later years.

After the Masonic government of Spain in 1767 had expelled the devoted Jesuits, all the mission property, since it was regarded as belonging to the missionaries and not to the Indians, was confiscated, and its care temporarily intrusted to royal comisionados. The result was that in 1793 the viceroy wrote: ‘‘There is no reason to doubt that they either wasted or embezzled the rich temporalities of all or most of the missions, and that these funds were lost, and decadence or ruin could not be prevented.’’